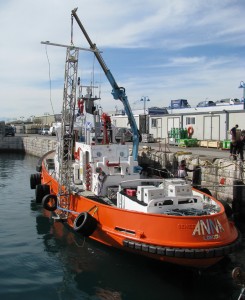 Recent high-resolution surveys of the wreck of New Flame, sunk by collision in the Straits of Gibraltar, exploited the full potential of multibeam sonar systems and utilised advanced data collection methodology conceived by ADUS. The resulting point cloud data was then visualised using 3D interactive techniques developed by the company. The results provided the salvage team with clearer and more informative imagery than has been available previously from other more conventional surveys.

It also allowed the agreed clearance depth over the wreck to be clearly defined, which was checked and confirmed by a later post-clearance survey.

A New, Accurate Shipwreck Survey Method used during the Wreck Removal Operations of the New Flame.

exceptionally high-resolution sonar surveys of wrecks were developed, together with new ways of visualising the results. This successful collaboration led to the formation of Advanced Underwater Surveys Ltd (ADUS).

Part way through the wreck removal operations on New Flame by Titan Salvage, the Gibraltar Maritime Administration required a survey. Titan commissioned ADUS and a survey of the wreck was undertaken in March 2009, followed by another in September 2009 after the wreck had been cleared to an agreed depth.

Results from the March survey highlighted the contrast between the previous competent hydrographic survey and the specialist wreck survey then undertaken.

Through empirical research ADUS has found that the best high frequency multibeam systems give the best results – provided they are coupled to the best motion reference units and positioning systems. A competent piece of surveying over a wreck using standard hydrographic survey techniques will rarely provide anything like the same level of information for the salvage team, as can be seen by comparing Figure 1 with Figure 2 (opposite) and Figure 3 (see page 2).

The difference in quality of the information provided by a specialist wreck survey company compared to that from conventional seabed surveyors is often a revelation to those in the salvage industry. The higher frequency Reson SeaBat multibeam systems provide the best wreck survey data, particularly

when coupled to an Applanix POS MV Inertial Navigation System (INS) to provide accurate motion compensation. Such equipment is rapidly becoming the industry standard in shallow water hydrographic surveys and the deployment methodology used by ADUS

dramatically helps to improve the quality of the data.

The Reson 8125 used for the New Flame survey has 240 dynamically focused beams at an angle of 0.5 degrees within a 120 degree swath across the seabed (Figure 4). A single short pulse of sound is transmitted from the instrument and the return echo from the point

where each individual beam detects a solid return is recorded with depth resolution of 6mm.

As the swath moves forward, hundreds of thousands of individual points are eventually surveyed and recorded as accurate X, Y and Z geographic coordinates. The level of absolute accuracy achieved for each point varies with each survey as it depends on a wide variety of factors, some of which are not always under the control of the surveyor, such as sea state and the skill of the helmsman. Within an ADUS wreck survey the position of one individual point relative to another is typically of centimetric accuracy.

The advantage of bathymetric multibeam systems is that they can provide true metrical data so that the distance between any two surveyed points can be measured, volumes calculated, and changes over time between surveys quantified. This is something that forward-looking, rotary and side-scan sonar systems can rarely do, or not with the same level of accuracy or precision.

For the New Flame survey, an Applanix POS MV 320 INS was tightly coupled to a Trimble R8 Real Time Kinematic (RTK) system to give accurate real-time position and motion reference information. The RTK base station was conveniently located approximately

850m from the site, adjacent to the lighthouse on Europa Point, and just above the stern of the wrecked Federa (Figure 5).

The local tug Anna was charted by Titan for the survey and the ADUS ISHAPS multibeam deployment system was mounted on the port quarter (see Figure 6 on next page).

The aim of the survey was to:

• Provide detailed visual information about the current condition and orientation of the wreck of New Flame;

• Give a clear graphic representation of the seabed around the wreck, including the distribution of any man-made material.

Through empirical research, ADUS has identified more than 50 individual factors which impact on multibeam sonar survey quality, sea state being a key factor. Typically, a wreck survey takes between one and three days to complete thoroughly, depending on the size of the area that needs covering, the 3D complexity of the site, and the weather conditions. The first survey of

New Flame took two days on site, but the data from the first day was discarded because the unsuitable sea state resulted in reduced data quality. It can be difficult to collect acoustic data from all the surfaces of a complex 3D shape, particularly from below an overhanging structure when, for example, the wreck has settled on the seabed with a pronounced list. The frequency of  high-resolution multibeam systems, in this case 445kHz, does not allow the acoustic energy to penetrate ship structure or the seabed, so the geometry of the wreck and the spread of the acoustic beams has to be calculated to ensure as good a coverage as possible. Extending this careful approach, a ‘keyhole’ surveying technique was employed to collect useful survey data from inside the wreck through a cargo hatch (see Figure 3 on previous page).

Of the seabed around New Flame, 140,000m2 was surveyed and showed that the depths varied from about 17–70m. The most significant natural features in the area were rock outcrops, one of which formed a 30m high underwater cliff 200m south of the wreck. New Flame came to rest across the cliff edge, but at a point where it was only approximately 5m high. This was still sufficient to break the vessel’s back across Hold 4 (Figures 7 and 8).

The first survey of New Flame provided both still 2D images and a three-dimensional interactive visualisation of the survey data  produced in ADUS’ WreckSight software. The program enables the viewer to fly around a virtual 3D image of the wreck

as well as being able to zoom in and out. The advantage of this over 2D images is that the brain more readily understands the relationship of points in 3D, and, therefore, key features on a wreck when they move relative one to another, which makes it

easier to understand and interpret the data. ADUS also employed techniques developed in the computer games and movie CGI industries to make the resulting imagery look more realistic. The end results provide clear, understandable information to both the wreck specialist and the non-expert, such as those working for the client who may be administrators or accountants with no experience or understanding of ship structures.

At the time of the survey the wreck had already been partially salvaged, but very strong and highly unpredictable currents made it difficult for the salvage team to understand precisely the layout on seabed. Accessing the site along a 2m diameter steel tube through the water column meant that divers were not able to get an overview of the whole wreck during ascent and descent. The survey was able to provide that overview and also accurate geographic coordinates of everything on the seabed, as well as the relative heights and depths of any structure, feature or object visible within the data. This information was invaluable to the salvage master, who was able to use it when planning the separation and lift of the stern of the vessel (Figure 9) and also the folding over of hull and deck plating to keep it below the agreed clearance level of 17.7m below Chart Datum Gibraltar (Figure 10).

The ‘keyhole’ surveying technique within Hold 5 identified that a substantial volume of cargo (scrap steel) remained around the edges where the grab could not reach (Figure 3). It was possible to calculate the mass from the survey data, which informed the salvage master that the estimated weight of that section of the ship would be heavier than anticipated and so could not be lifted as a single entity.

A second survey was commissioned once the engine room and stern section had been removed, and the wreck reduced in height. This second survey showed that one section of hull plating was still shallower than the clearance depth. This was quickly dealt with and a final survey confirmed that nothing of the wreck was above the shallowest rock in the area and so was below the agreed clearance depth.

Precision multibeam surveys can provide important information for the planning of salvage operations. If such information is made available to salvage companies before the tendering process for the wreck removal or other salvage work, then costings could be more accurate. If available before the start of a salvage operation, it makes dive planning easier, lift and recovery planning more realistic, and also reduce the chances of expensive, unforeseen situations being encountered on the seabed.

Even in the case of New Flame, where ADUS was brought in halfway through the wreck removal, the salvage team’s efficiency was  improved by having access to high-resolution survey results. Precision surveys are more expensive than conventional hydrographic surveys, but the amount of useful information they can provide is generally worth a lot more to the salvage company than the cost difference between the two survey types. Given that the results from high-resolution surveys can be equivalent to removing a blindfold from a salvor’s eyes, allowing both an accurate overview of the site as well as more detailed and quantifiable information about the wreck, it should be an essential part of a salvage team’s toolkit in the future.